HISTORY OF THE SWARTBERG PASS

The Swartberg Pass, a National Monument between Prince Albert and Oudtshoorn, is undoubtedly one of the most spectacular and best known mountain passes in South Africa. It is the masterpiece of the brilliant engineer and road builder, Thomas Charles Bain (1830 – 1893), and the last of the seventeen passes he built in the Cape Province.

Originally the routes through Meiring’s Poort and Seven Weeks’ Poort were the only links between the port of Mossel Bay and the towns and villages of the Great Karoo. The road through Meiring’s Poort was often closed due to flood damage and rockfalls. The heavy flooding during 1875 caused the closure of these gateways for weeks.

In 1879 Thomas Bain was commissioned to plan a new route over the Swartberg Mountain Range. The existing footpath over the mountain between Prince Albert and Oudtshoorn could only be negotiated on foot or on horseback. Due to the unavoidably steep gradients, Bain tried four different lines before he succeeded in finding a practical one. Bain’s original master plan was approved by the Government in 1880.

The building of the Swartberg Pass proved to be a mammoth task. As Bain was building the Tsitsikama road, John Tassie’s tender of £18120 was accepted. Employing 100 Mozambicans from Delagoa Bay he started construction from the Prince Albert side of the mountain in 1881, but after 13 months of toil he had advanced only 6 kilometres.

After Tassie was declared insolvent, construction came to a halt for a year, until Thomas Bain took over the building of the pass in November 1883. Using 200 to 240 convicts he tackled the job with great enthusiasm.

The pass was built with the use of pickaxes, spades, sledgehammers, crowbars, wheelbarrows and gunpowder. Boulders were split by heating them with fire and then dousing them with cold water. Rocks were broken into smaller pieces with sledgehammers and then carefully dressed by the convicts. The dry-wall method of construction was used to build the impressive retaining walls that supported the road against the precipitous slopes. A century later, travellers still wonder at this feat.

Meat, dried beans, soup and other kinds of food were cooked in large pots for the convicts. Fresh bread was baked and an ox and sixteen sheep were slaughtered daily to provide meat for everybody on the project. The convicts were divided into teams and the ruins and remains of the convict stations can still be seen in the Swartberg Pass.

Conditions during the winter were very unfavourable. During May of 1885 heavy rain and mud slides almost destroyed the convicts’ camp. The nearly completed road was also badly damaged. The road through Meiring’s Poort was completely washed away by the same flood.

The name of the pass was changed frequently during the construction phase. Originally it was to be named “Rainier’s Pass” in honour of Prince Albert’s then magistrate, George Rainier, who was responsible for petitioning a pass to the Cape Government.

Later the name “Luttig’s Pass” was considered to commemorate J.R.G. Luttig’s contribution to the completion of the pass. Other names up for contention were “Victoria Pass” or “Jubilee Pass” in honour of the British monarch’s 50 years on the throne. The town councils of Oudtshoorn and Prince Albert finally settled on naming the pass “Zwartberg Pass.”

The official opening of the Swartberg Pass was 10th January 1888. All the shops and offices in Prince Albert were closed for the day to allow everyone to participate in the festivities. At 7am that Tuesday the procession, consisiting of about 100 vehicles (spiders, capecarts and mule wagons) started off from Haak’s Hotel on the 3 hour trek to the open terrain near the summit. It’s estimated there were about 500 people present, including reporters from six newspapers.

The Commissioner of Crown Lands and Public Works, colonel F.X Schermbrucker, officially opened the pass. Miss Gertrude Schermbrucker broke a bottle of champagne at the summit of the pass, 1 585m above sea level, and a twenty-one gun salute concluded the ceremony.

On 5th May, 1888 a toll was proclaimed on the summit of the pass. From the eight tenders received, John F. Mackay was appointed the first toll official with a salary of £45 a year. Besides collecting the toll fee(4 pennies per wheel and 1 penny per animal), the official was responsible for maintaining the road in good condition. The official was also allowed to use collected toll fees to his own advantage.

SIGNPOSTS IN THE SWARTBERG PASS

The following boards (from north to south) have been erected to indicate places of historic interest:

EERSTEWATER (First Water)
It was given this name because the draught animals could be outspanned here before the long, tiring journey. On their return they were fed and watered here. Bain’s first convict base camp was here and the ruins are still visible.

TWEEDEWATER (Second Water)
The older people will remember that before the low-water bridge was built, they had to wait for the water level to drop before crossing the stream.

MALVADRAAI (Geranium Bend)
This is the spot in the mountains where geraniums (Pelargonium zonale) grow luxuriantly. They are always green and often covered with flowers. One just cannot miss them. This natural inlet offers the traveller a place to stop and look at the rock formations. One of the Swartberg’s most beautiful hiking trails starts here.

BLIKSTASIE (TRONK) (The Jail)
During the building of the pass, a stone and clay structure to confine the convicts at night, was built at this spot. The present ruins are the remains of this structure.

DROËWATERVAL (Dry Waterfall)
During the rainy season it is a unique sight to see the water cascading down. During the summer months it is usually dry; hence the name.

TEEBERG (Tea Mountain)
In this area you will find the well-known honey tea bush which was much sought after by earlier inhabitants. Dealers used to market the honey tea in large quantities. This is surely one of the most aromatic teas, but unfortunatelyit is unknown to the younger generation. From this point the summit of the pass is visible, and if you look into the chasm, you will recognise ‘Malvadraai’ far below.

FONTEINTJIE 1884 (Little Fountain)
This fountain forms a beautiful waterfall and is a perennial stream. A few hundred metres higher is a pine plantation started as an experiment in 1927. (Pinus muricata; Pinus taeda)

GAMKASKLOOF 57KM (Gamka’s Kloof)
Also known as The Hell, it is a secluded settlement in a valley in the Swartberg Mountains and is well-known for its delicious fruit and vegetables. Its dried figs are a gourmets delight.

DIE TOP (The Top)
The Top is 1 585m above sea level and the highest point of the pass. From this point nature lovers can see the marvels of creation for kilometres to the north and south.

DIE GROOT KLIP (The Big Stone)
This is a very popular place to stop when travelling from the south. From here the summit of the mountain pass is visible.

BOEGOEKLOOF 1886 (Buchu Kloof)
In earlier days this was the areas medicine chest because various species of buchu grow here. The best known is the mountain buchu (Empleurum unicapsulare), aniseed buchu (Agathosma cerefolium) and long leaf buchu (Agathosma crenulatal). The buchu was usually put in brandy or vinegar and the extract used as medicine for stomach and many other ailments.

SKELMDRAAI (The Tricky Bend)
To the traveller from the north, the road seems to come to an end, and then it turns sharply to the left. From the south the road is very steep with a difficult, concealed hairpin bend, hence the name.

FONTEINTJIE (Small Fountain)
(On the southern slope)
Here a perennial stream flows from the high peaks to revive tired travellers. In bygone days a watermelon was placed in this stream by travellers from Prince Albert when they visited Oudtshoorn. On their return the well chilled melon could be enjoyed.

HOTELLETJIE (Small Hotel)
After the completion of the Swartberg Pass a postal service was instituted between Prince Albert Road and Oudtshoorn. To offer overnight accommodation, a modest hotel, the ruins of which can still be seen today, was erected on the southern slope. Some old maps still refer to this old inn as the Victoria Hotel.

PLANTASIE (Plantation)
This pine plantation was started as an experiment in 1927. It is a convenient picnic spot where tables and benches have been erected. It provides the ideal place for stretching one’s legs.

WITDRAAIE (The White Curves)
These curves are so named because of the two hairpin bends cut into the limestone deposits, which give the road a whitish appearance.

STALLETJIE (The Stables)
The horses that were used to draw the mail coach were fed and watered here. Fresh horses were harnessed for the journey both to the north and the south.

NEVILLE SE DRAAI (Neville’s Bend)
There is a sharp bend on the plateau on top of the mountain. It was too dangerous to erect a sign there, but the bend is called ‘Neville se Draai.’ At the age of 42 John Fitz Neville, Clerk of Works during the construction of the Swartberg Pass, was killed in an accident on this curve on 8 March, 1888. Some people believe he was killed in a dynamite explosion and others say he was thrown from his horse. 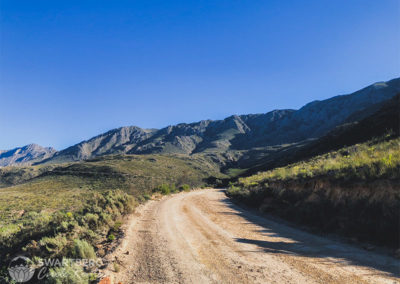 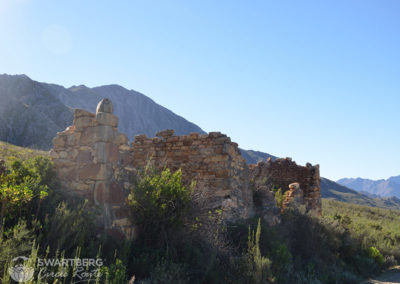 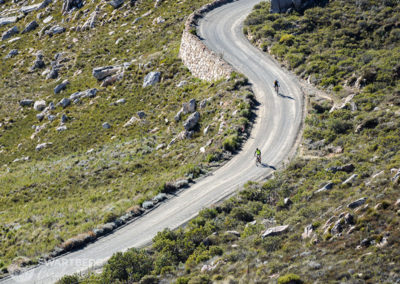 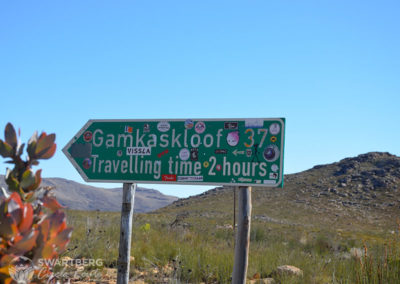